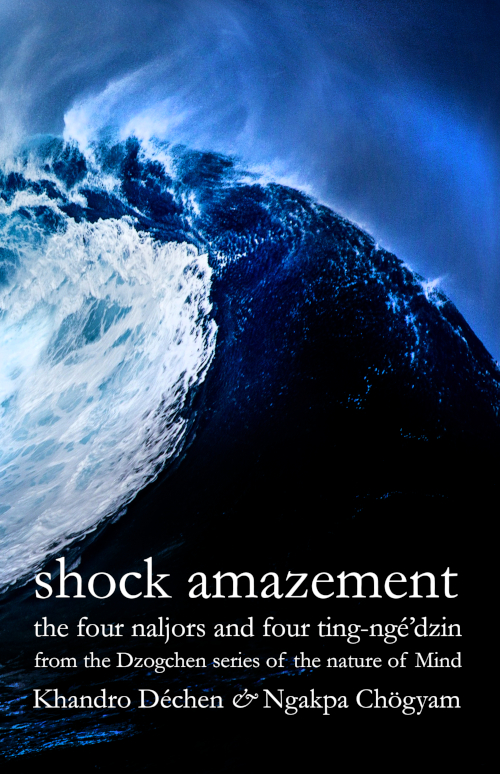 by Khandro Déchen and Ngakpa Chögyam

Dzogchen is the primordial state of the individual. It is beyond limitations. Dzogchen is free of magical, religious, philosophical, or political conditioning. It is non-liturgical, non-ritual, direct, and symbolically minimal. Dzogchen is the heart and mind of Nyingma - and yet ‘Shock Amazement’ describes the core practice of Sem-dé: the direct mode of recognising the nature of Mind. It does so in creative, contemporary language: free of dense philosophical complexities, eulogisms, or tautology. The authors, as the Lineage Holders of the treasure teachings of Aro Lingma, are uniquely placed to describe what is ‘shocking’ and ‘amazing’ in gaining direct access to the nondual state.

In terms of acclimatising to the undefined dimension of existence – it should be understood that: imagination relies on empty perception; paintings rely on empty planes; sculptures rely on empty space; music relies on silent time; and, literature relies on empty conceptuality. If the art of freedom is to be realised—if creative potential is to be discovered—reliance on the experience of intrinsic emptiness is the only precursor. The practice of shi-nè therefore, is the gateway to the art of freedom. Dzogchen sem-dé moves beyond emptiness and that which arises from emptiness into the sphere in which there is simply naked nature of perception – rigpa.