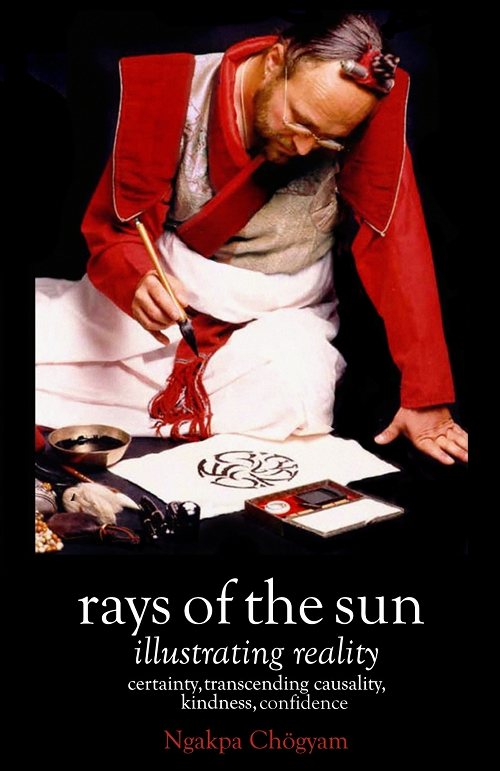 Rays of the Sun

In the early days of Vajrayana few Tibetan Lamas visited Britain, and eager students were often prepared to travel considerable distances to receive instruction. Yet some sought out a young Englishman recently returned from the Himalayas. Inspired by the magic and mystery of Tibet, they were keen to discover the lived meaning. Ngak’chang Rinpoche’s teachings were simple, direct, and experiential. The four evening talks contained here deal with the themes studied by everyone exploring Buddhism in depth: the four noble truths, eightfold path, causality, compassion and refuge. This material is discussed in creative contemporary English, and presented from a perspective informed by Dzogchen. Rinpoche was first asked to teach by Gétsulma Tsültrim Zangmo, a Western nun whom Rinpoche named ’ö-Zér Nyima after she received Dzogchen transmissions from him. ’ö-Zér Nyima means Rays of the Sun and this book is dedicated to the memory of this extraordinary English woman.

The first fundamental certainty is the experience of unsatisfactoriness. Dukkha—unsatisfactoriness—is not what we are and where we are – but how we are. It’s the subjective quality of our experience that is being described as unsatisfactory. The problem lies in our way of seeing rather than in the material fabric of the world.

Awareness means relinquishing the police state of karmic-vision and assuming personal responsibility. Karma is the sum total of our perception in all its excruciating intricacy. The ‘Law of Karma’ is different from externally enforced societal law, because ‘karmic law’ is directly consequential and self-implementing. We perceive the world in a certain way, and react to it in accordance with that style of perception. That is what is meant by karma. There’s no injustice in this kind of ‘law’ apart from the injustice to the nondual state perpetrated by karmic patterning.

An act of kindness enables us to side-step our attachment to the past and future. It is a moment out; a day off; a holiday from me-centred concerns – and, as such, it can be lived vividly moment by moment.

The topics in this book are original talks, which makes them succinct, filled with anecdotes, color, and common experience, they are short enough to satisfy a proper introduction and so elegantly mirrored through Sutric, Tantric and Dzogchen teachings as to be panoramic in view. Rays of the Sun addresses the fundamentals of the path so accessibly that eureka gongs and lightbulbs are bound to syncopate in a sort of personal orchestra. Rays of the Sun shows that anyone with a mind is already involved with Buddhism.
— Adam Fairbanks The contemporary language used throughout the text is key. For those who have already studied Buddhism, the use of these contemporary terms provides a fresh understanding. This book is like a cool spiritual shower in one's heated existential quest.
— Rossinna Ippolito

View the full press release at PressDoc and PrLog