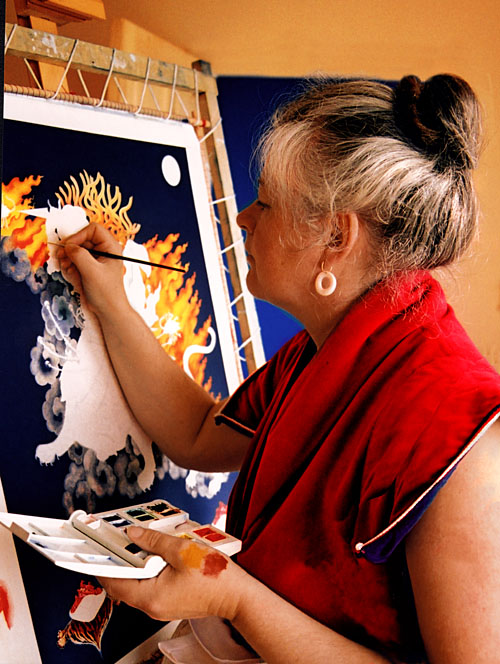 Ngak’chang Rinpoche and Khandro Déchen recommended that Pema Zangmo learn as much as she could with regard to thangka painting – including learning from Tibetan painters expert in the different styles. At the end of a pilgrimage to Ladakh, she went to McLeod Ganj to continue her studies within the thangka painting school of the Dala’i Lama. Since it is not customary for Westerners—especially women—to study within the school, she practiced her instruction outside, where she completed line drawings constructed in the Gélug style. She learned painting techniques, how to gesso a canvas, grind and mix stone paints – and how to mix paint from gold. She visited several thangka painters in the area and received advice and instruction. She is proficient in the framing of thangkas with brocade in the traditional style.

Although she appreciated the traditional style of Tibetan thangka painting, she found it disappointing that the vivid sexuality of the yidam images was obscure – which is why working with Ngak’chang Rinpoche and Khandro Déchen is important to her. On the advice of ’Khordong gTérchen Chhi’mèd Rig’dzin Rinpoche, the Aro gTér yidam images are not constrained by celibate aesthetics. As Khandro Déchen presents them, the yidams dance boldly from the canvas with naked dignity.

Ngak’chang Rinpoche and Khandro Déchen’s approach to thangka painting is to be true to Vajrayana: to depict the yidams as luminous light bodies, rather than using the more subdued colours of the modern Eastern style. Like her Lamas, she desires to be traditional with regard to Vajrayana rather than traditional according to culture.

Pema Zangmo’s main practice is the depiction of awareness-beings. This practice, which she maintains both in and out of retreat, rests upon the concentrated recitation of mantra. She has made it her life commitment to help bring the Aro gTér imagery into being, and does her utmost in encouraging anyone who wishes to take part in this wonderful opportunity to make the Aro gTér visible.