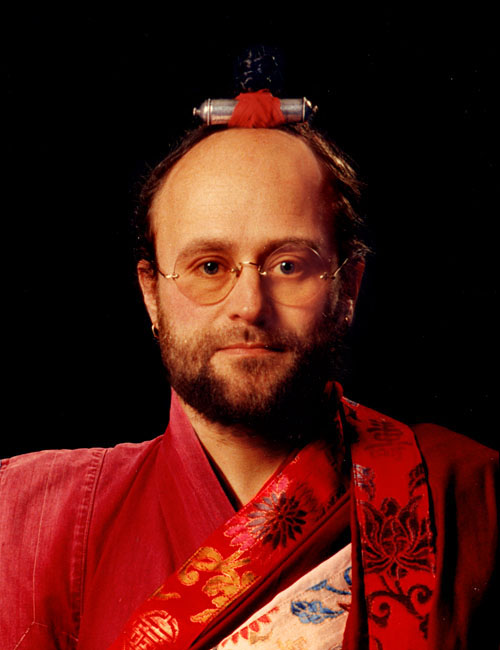 Ngakpa Chögyam was born in Hanover, Germany in 1952 to an English father and German mother. His maternal grandmother was Clara Schubert (a niece of the composer Franz Schubert). His childhood was spent in the South of England. At the age of eleven, he developed an interest in Vajrayana Buddhism through a book of Tibetan art and culture that he discovered in the school library. He went on to become an outstanding art student (gaining a first class honours degree and teaching qualification) with a particular interest in thangka painting – Vajrayana awareness-imagery.

In the early 1970s he travelled to the Himalayas of India, Nepal, Sikkim, and Ladakh. Ngakpa Chögyam sought teachings in a non-sectarian manner from Lamas of all schools. In particular he received teachings from many of the most revered teachers of the Nyingma Tradition. His five main Lamas are Kyabjé Düd’jom Rinpoche, Kyabjé Dilgo Khyentsé Rinpoche, Kyabjé Künzang Dorje Rinpoche, Khordong gTértrül Chhi’mèd Rig’dzin Rinpoche, Lama Khamtrül Yeshé Dorje Rinpoche. He also studied with Könchog Rinpoche, the abbot of the Nyingma Gompa in Tso Pema. This was a time when it was still possible to meet and study intimately with many of the greatest living Vajrayana Buddhist teachers. Sadly, only Kyabjé Künzang Dorje Rinpoche and his sang-yum Jomo Sam’phel Déchen, are alive now.

Ngakpa Chögyam accomplished the traditional practices and received the necessary empowerments and transmissions of a Nyingma Lama. He completed four years of solitary retreat in caves and tsam-khangs in the Himalayas. He undertook many pilgrimages to the sacred places of Padmasambhava and Yeshé Tsogyel and underwent considerable privation in the course of his travels. Since Ngakpa Chögyam did not come from a wealthy family he subsidised his lengthy sojourns in India and Nepal entirely through factory work and manual labour in Britain between his travels. During this period, he spent as much time as he could studying and practising in the East – even though it meant living in extremely basic conditions often with little to eat.

With the encouragement of his Root Lamas to begin his third Lama ’khorlo (bLa ma ’khor lo – turning the wheel of teaching and empowerment), he returned to Britain in 1979. It was not clear to Ngakpa Chögyam how he should begin to teach as he had no connections in the British Isles in terms of Vajrayana – but adventitiously he was invited to teach at the Tibetan Centre in Raglan by a Western nun called Tsultrim Zangmo. Great interest was shown in this first evening talk and Ngakpa Chögyam was requested to return to give a full weekend of teaching. It was from that weekend that his first students emerged and from that point onwards a sangha was established. These students were Ngala Nor’dzin Pamo and Ngala ’ö-Dzin Tridral. It was here also that Ngakpa Chögyam met his sang-yum, Khandro Déchen.

Between 1979 and 1988 Ngakpa Chögyam made several short visits to his Lamas in between working as a temporary on-call truck driver.

Of this Ngakpa Chögyam comments:
It has been extremely valuable to me to have worked for a living in the areas where people have fewer choices. Manual labour is not the most common background for those in the field of conveying Vajrayana to Western people – and I appreciate the insight it has given me into the prevalent human condition. I know what it is like to endure night shifts, alternating three-shift work, and to come home tired from work that is not vividly creative or fulfilling. I also know what it is like to have the freedom of having no career and no comprehensible direction other than Vajrayana. Khordong gTérchen Tulku Chhi’mèd Rig’dzin Rinpoche once said to me that if I placed my trust entirely in the teachings of the gTérmas I would always survive, and that thought has sustained me though every difficulty. Having said that, I regard myself as having had a relatively easy life in comparison to what is possible. If any of this experience has value – I would say that it is ‘appreciation’. Whatever I may lack as a Lama, I have learned that to appreciate is to be continually delighted.

In 1989, he was awarded a doctorate in Tibetan Tantric Psychology from the University of West Bengal (Shantiniketan) through one of his main teachers, the great gTértön and Speech Incarnation of Padmasambhava – Kyabjé Khordong gTérchen Tulku Chhi’mèd Rig’dzin Rinpoche.

In this life Ngakpa Chögyam, together with Khandro Déchen, are the Mind Lineage Holders of the Aro gTér – the Pure Vision gTérma Cycle of Khyungchen Aro Lingma, received by her directly from Yeshé Tsogyel.

Since the turn of the century, however, he has retired from this area of endeavour to concentrate on giving private retreats for his personal students, training teachers, writing books, and composing practice materials. He nevertheless maintains a commitment to giving two public retreats a year in Britain and the USA. He also occasionally fulfils teaching requests from Buddhist organisations such as the Shambhala Centres – particularly in San Francisco.

Ngakpa Chögyam is a poet, thangka painter, multitalented Vajrayana craftsman, and exponent of Yogic Song and Lama-dance. He is also a Vajrayana calligrapher and Rays of the Sun is illustrated with his calligraphies. The scripts Ngakpa Chögyam uses in his calligraphies are called u-mèd and u-chen. They originate in part from the ancient script, Lha-bab-yig-gé, meaning: script-symbols from the sky-expanse. Written words are sacred in Tibet because they carry the knowledge of liberation.

Ngakpa Chögyam says:
A sky signature is the ‘sky’ signing itself, within itself and out of itself. The ‘sky of one’s Being’ can ‘sign itself’ in its own dimension, but for this to come about, there has to be the experience of Mind itself as being identified with the sky; an expanse without limit. The nature of Mind is like the sky. Ideas and images that arise within it, are like clouds. Clouds appear and disappear, but the nature of the sky is unchanged. When a calligraphy can arise as freely as the play of clouds, then the sky of one’s being has signed its signature.

The form of these ‘sky signatures’ is both ancient and modern. Their spontaneous style was first evolved by Chögyam Trungpa Rinpoche from the influence of his friendship with Shunryu Suzuki Roshi. Variants of this style were later taken up by Ta’i Situ Rinpoche and other Lamas, including Ngakpa Chögyam.

Spontaneous calligraphy is new to Tibetan tradition, and as yet has no rules – each Lama works individually. Ngakpa Chögyam uses a variety of turnip Tibetan brush which holds a considerable quantity of shellac-based Indian ink, boiled for extra density to give unusual crispness and shine. He uses a heavily loaded brush rather than a ‘dry’ brush, as is used in the Chinese and Japanese styles. Due to the speed at which the calligraphies are executed, ink droplets explode onto the paper, causing the ‘splatters’ by which Rinpoche’s calligraphies have become known. Ngakpa Chögyam uses hand-made rag paper from Sikkim – which is inconsistently absorbent, and unpredictable in terms of how it reacts to the ink. The paper is pressed between threadbare blankets, giving each sheet its unique texture. The roughness breaks the edge of the brush strokes allowing tremendous variation in character of each sky signature. Ngakpa Chögyam obtains his paper from an English company who import their paper from the East and can only occasionally provide him with this paper.

The manufacturers in Sikkim change their blankets more regularly now that they export their paper to Britain – with the result that the ‘substandard paper’ (resulting from threadbare blankets) which Ngakpa Chögyam prefers, has become increasingly rare.

Ngakpa Chögyam and Khandro Déchen are the parents of two children. Their son Düd’dül Dorje was born in 1996 and their daughter Künzang Tsodrön was born in 2003. Both children were named by Kyabjé Künzang Dorje Rinpoche and Jomo Sam’phel.

Ngakpa Chögyam and Khandro Déchen make it a priority in their teaching activities—as a couple—to help students to view their relationships and family lives as spiritual practice. As representatives of a lineage founded by a woman, they are keen to help women become spiritual practitioners and teachers. To date, Ngala Nor’dzin Pamo and Ngakma Shardröl Du-nyam Wangmo have undertaken teacher training and have emerged as Lamas with their own sanghas of apprentices.

Ngakpa Chögyam is known particularly for his presentation of Dzogchen sem-dé and the Khandro Pawo Nyi-da Mélong Gyüd (mKha’ ’gro dPa bo nyi zLa me long rGyud), although he specialises in Dzogchen long-dé and Dzogchen men-ngag-dé with his personal students. Both Ngak’chang Rinpoche and Khandro Déchen teach mainly within the ethos of Dzogchen and enjoy cordial informal teaching scenarios with their apprentices in Britain and the USA.

Biographical notes courtesy of Aro Buddhism, Aro Encyclopaedia and Rays of the Sun

Rays of the Sun

Wearing the body of Visions